I LOVE Me a Good Deal!

If you are a make-up horse or if you just need some new gloss you're going to LOVE this deal.

The cosmetic line E.L.F (Eyes-Lips-Face) has been bought out by Nordstroms and will be re-packaged with the Nordies label SO...... that means a big 'ol sale. Most products are $1 - some are $3.

At check out enter the code CAROLINA and get an additional $7.50 off any orders over $15.

(Sorry, I would link to it but I still haven't figured out how to do that!)

When you just can't be there

So yeah - I dropped off the face of the planet....again. And when I tried to buckle down and get back into this blogging game all I could manage was a measly YouTube video. At least it was something. In my defense, I have been busy at work. Busy with what I really can't say. Putting out little fires here and there, herding cats - you know, the usual. But since I take advantage of the awesome high-speed-connective- goodness of my office to read/write on my blog, having to do stuff like work at work is really cramping my style! The good news is that my hubby and I are finally looking into joining the rest of civilization and getting high speed service in our home. Praise God! And when we do, maybe it will be exactly like that commercial you may have seen recently on TV -you know the one about the lady who finally gets high speed Internet service at home and then gets a big, fat promotion at work because she's actually working at work instead of farting away her time in the office downloading pictures of cats.

Anyway, enough talk about high speed Internet! That's not what I came here to talk about so let me get right to the subject and delay no longer.

The Captain got hurt the other day. Not seriously, but he took a pretty good fall at school. It could have been a lot worse than it was so I'm very thankful that the boy drinks his milk and has strong bones. Apparently, he was at the very tip top of this climbing structure that has a fireman-type pole attached to its side. All the kids love to climb to the top of this thing, swing across, grab onto the pole and slide down. The Captain was hanging from the top of the pole when he fell all the way to the ground, landing flat on his side.

It scared the shit out of him more than anything, and he was fine after some TLC from his teachers. I would never have known about it because he was his happy normal self when I arrived to pick him up. It wasn't until I pulled the incident report from his cubby and discovered what had happened that I felt a wave of guilt and near panic wash over me.

I know I can't be there for every "owie" that my kids get - but this could have been bad and I felt like crap that I wasn't there when he was probably so scared. It was someone else who comforted him and told him that it would be okay. In the back of my mind, I know that me not being there was probably a good thing because if I had seen him fall like that, I probably would have passed out cold which wouldn't have been helpful at all.

Somehow The Captain's accident on the playground brought memories from my own childhood flooding back to me. I was maybe 7 yrs old and I loved to ride my bike around the neighborhood and back in the day wandering several blocks away was no big deal. I ended up riding past my friend's house and her family happened to own a very unfriendly Doberman Pincher who was pretty pissed off that I was riding my bike in front of their house. The dog was tied up in the backyard and it just kept barking and lunging against it's chain. Looking back it was obvious that I should have hightailed it out of there, but I was an oblivious little kid and didn't think a barking, extremely aggravated off dog posed any danger. After all, he was tied up with a really big chain so I saw no reason to leave.

Well, as you can guess, the dog broke free of his chain, ran me down, knocked me off of my bike and proceeded to bite me in four different places, drawing lots of blood and lots of really really loud screams. My friend's parents came running out of their house after what seemed like an eternity and pulled the dog off of me. They took me inside, patched me up and sent me home and then I'm sure probably proceeded to shit their pants while waiting for a phone call from my parents.

I rode my bike home with the bites on my legs, hands, and arms stinging in the breeze and still bleeding. My dad's face turned ghost white when he saw me walk through the door - all bloody and bandaged up. With tears in my eyes I told him what happened. I remember the look on his face when he realized that all the screaming he had heard had come from me. It was all screwed up and pained, like like he had just been sucker-punched right in the gut. The next thing I remember he was on the phone, screaming at my friend's parents and saying that he was "coming for their dog".

Of course the dog was put down but I still felt bad for it even though it practically ate me for snack. But now that I have kids myself, I know I would've done the exact same thing. And now I know exactly how my dad felt when realized he wasn't able to protect his little girl. I felt the same way the day The Captain fell off that stupid play structure - and he wasn't even really hurt.

I know that as a parent of two boys I will have many opportunities to kiss boo-boos and sooth owies and those aren't the instances I worry and fret about. It's the ones that I miss that I worry about hurting them the most.
Posted by Leslie at 1:04 PM 3 comments:

I actually had this done to my new van recently - it was great. Not.

A Rare Moment of Peace 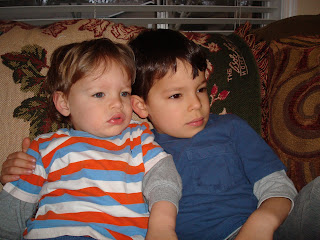 I love this picture. Captain Crazy and Little D were snuggling with each other one morning before they left for school and I went to work. I came around the corner, wondering why it was so quiet, and saw them just hanging on the couch togther and I just had to snap a quick shot. Most of the time they aren't like this with each other. In fact, most of the time I don't think there's much love lost between them. And it worries me to be honest.

They aren't doing anything that's endangering their welfare - they're not trying to club each other over the head with blunt objects or chasing each other with sharpened sticks. They just argue and bicker and compete against each, a lot. And it's driving me nuts.

Captain Crazy starts a lot of it. He rarely passes up an opportunity to point out to his little brother that he thinks has more Mac n Cheese than Little D has, or that his Mac n Cheese noodles are bigger than Little D's noodles. Or he'll pitch a fit if Little D gets dressed first in the morning or gets his shoes on before he does. But they are both equally guilty of fighting over who gets my attention - often screaming "My Mommy!" and pushing the other out of the way in order to get to me first. It's this last behavior that is most the frustrating for me. I pay so much attention to my boys and I try my absolute best to make sure that I give them both equal amounts of affection, but it just doesn't seem like enough. No matter what I do, it feels like it will never be enough.

It's frustrating and tiring. At the end of the day I sometimes feel like I've been mauled or manhandled or something along those lines. My nerves are frazzled and I feel like I somehow have failed at raising them because they just don't really get a long all that well.

I'm sure it's a phase they're going through. They won't always be fighting each other to get a hug or kiss from Mommy and they won't always care about who is first into the car or out of it. I'm going to have to remind myself of this fact often because right now they do care about that stuff and they argue a lot. And focusing on the times when they are getting along (like in the picture) will help a lot too. In the meantime, if anyone reading this has any helpful advice, I am all ears!
Posted by Leslie at 3:49 PM 5 comments: