If you are the other half of a couple that marks milestones with presents, cards and sweet little nothings, then you get the picture.

This past weekend was our 7th anniversary. And this year, just like in all the past years, it came and went without much fanfare. Again it felt like the date snuck up on us, took us by surprise. We scrambled to find a baby-sitter and rushed to make dinner reservations. Again no presents -just dinner and a movie and then home before 12 so the babysitter wouldn't be out too late. We didn't even open our cards on our anniversary - I forgot to take mine to dinner and I left his in my purse - so we opened them separately when we each had time this weekend.

Our lackadaisical attitude would surely bother some, but my husband doesn't have a romantic bone in his entire body so this kind of half-assed attempt at celebrating such a big milestone doesn't bother him. In fact, we often poke fun at how unromantic he can be - which we often back up with the story of how he asked me to marry him by handing me my ring in it's box and saying "here ya go" while his roommate ate a burrito the size of a small baby on the couch right next to me.

Sometimes I think back and wonder where the time went. but other times it feels like I have been married F.O.R.E.V.E.R. Not to dump on my marriage or anything because I know for a fact he feels the exact same way at times. We each have our little habits that drive the other to drink. He swears that I have poor organizational skills which he likes to point out every time I misplace my car keys or my cell phone. He leaves his shoes right, smack in front of the doorstep so that when you step out the door, you risk twisting your ankle or falling and breaking your neck - it all depends on the size and number of his shoes that are left there. We both of course deny having any faults of any kind - but I have photographic proof. This was taken last year on our trip to Hawaii to visit his parents. It's a death trap! So now I know why he does what he does. Yikes! 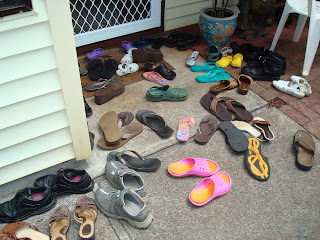 But as half-assed as our date nights and milestone celebrations might be - it's still great being married to him. And what he lacks romantically he makes up for with heaps of loyalty, dependablility, kindness, and humor - which comes in handy when I'm yelling at him because I just tripped over his sneakers....again.
Posted by Leslie at 9:58 PM 6 comments:

I started this little blog of mine a little over a year ago when I was working part-time and still had time to peck out a few random posts here and there. Then that nasty recession caught up with me and overnight I went back to being a full-time SAHM.

That's when things got a little crazy. Being home with my two boys was non-stop activity and by the end of most days I had just enough energy to keep my eyes open until 9 and then it was "game over". My blogging decreased dramatically and I missed it. I made several feeble attempts at a "come back" swearing to myself that I would resume a regular schedule of reading my favorite blogs and throwing a little something up on here as well. I failed miserably.

Then I got another job and found myself juggling the demands of working full-time and being a full-time mom all the while beating down the guilt and sadness of not being with my boys. I enjoyed working though and soon adjusted to the entirely new pace my life had acquired when change swooped down again. I was asked to apply for new position within my company. This new position came with more pay but also more stress, hours, and responsibility - so of course I took it. I am a glutton for punishment if nothing else! Now my work sometimes calls me into the office at 7 and keeps me there until after 5. Most nights it keeps me awake long after I should be asleep.

Being so busy has forced me to zero in on my priorities and focus on what is important to me. I have dropped a lot of activities from my schedule and I haven't missed them - except for blogging. For months now I have been thinking about all the things I would like to whine -I mean talk about, on my blog and I have just decided once again, to yank back my towel, wring out and go another round.

This time I plan to stick around.
Posted by Leslie at 9:55 AM 1 comment: