That time of Year Again

I LOVE Fall. Love it, love it! I swear the crisp air tinged with apple rot invigorates my very soul, and my stomach does a little flip when I see the piles of pumpkins appear in front of grocery stores.

Yep, the arrival of Fall brings with it many of my favorite things - adventures to pumpkin patches, piles of crunchy leaves in the streets, beautiful colors in the countryside, apple cider donuts, honey crisp apples, Harvest Festivals, Halloween, and Pumpkin Spiced Lattes - just to name a few. Hell, I don't even mind that the craziness of the holidays is just around the corner.

What I do mind, however, is that it doesn't last long enough. At least around here. It always seems that to me that the leaves turn and fall too quickly and after maybe 2 months, if we're lucky, it's over.

Then it's really Wintertime. With the constant rain. And that sucks. A lot.

So as usual, I am really trying to enjoy every single day of this season by squeezing as much out of it as I can. We're going to another pumpkin patch this weekend and I will lug 10-15 pumpkins home and they will grace my yard until after Thanksgiving. I will bake my favorite fall pumpkin recipes, I will make jam, I will get the garden ready for it's long rest and I will take a lot of pictures - at least those will be around forever. Their promise of better times to come something to cling to in the dead of Winter. 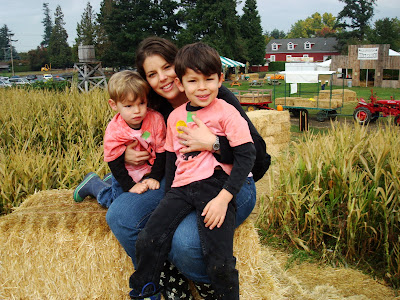 This was taken in 2009 at a pumpkin patch at one of my favorite country stores. I had just been laid off and this was the first time I had ever been to a pumpkin patch with the boys during the week. I think we went to a different pumpkin patch every week that fall!! 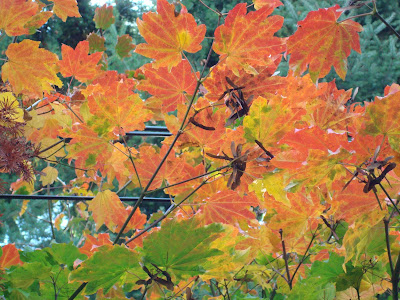 This was taken in my backyard. 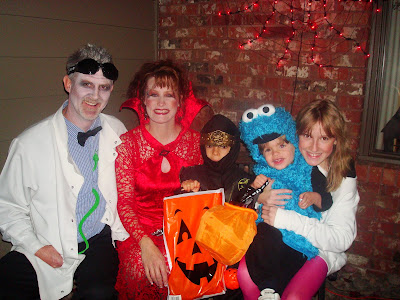 This was also taken in 2009. It's the boys with our next door neighbors - who obviously really dig Halloween. Brad was a Mad Scientist and he made a "lab" complete with boiling "stuff" in test tubes and eerie green lights and smoke. He set it up in their front window and it looked awesome. They had a crowd of people watching his "work" all night long. But I still think Cookie Monster steals the show. 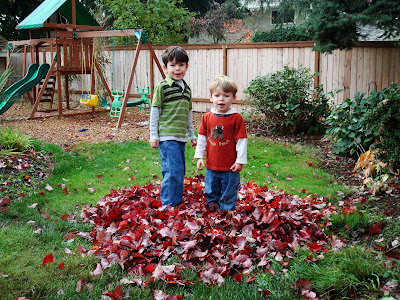 Another backyard pic. The pile was a lot bigger than it looks in the picture and the boys were having so much fun - one of the rare times during that age when they weren't bugging the crap out of each other! 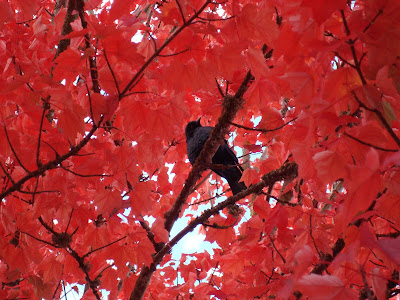 This was taken at a Walmart. This tree was flaming red and had tons of black birds hanging out it in. I actually drove home and returned with my camera. Luckily some of the birds were still there. 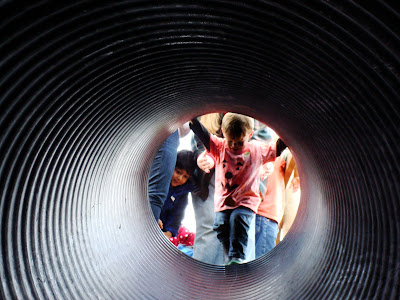 Another pic of Little D at a Pumpkin Patch - this time as a guest with Captain Crazy's class. 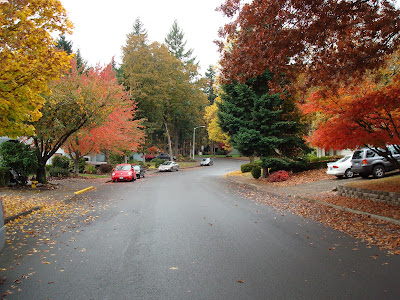 The view of my street as I turn onto it. This wasn't even taken at the height of the color because a couple of the bigger trees still hadn't turned completely yet.
Posted by Leslie at 8:39 PM No comments: