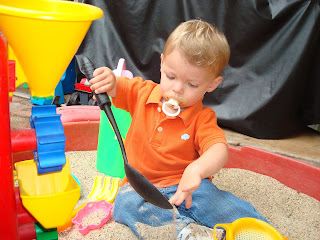 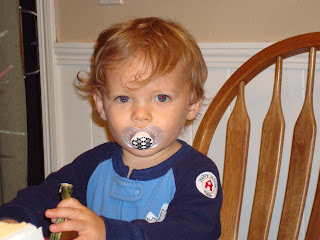 My little sweetpea is going under the knife on the 15th. Yep. He has to have surgery.

He has what's called a Hydrocele which is basically a fluid sac in his testicle. In a "nutshell" fluid is leaking into his testicle from openings that should have closed after his testes descended. The condition isn't life-threatening, but if left untreated he could develop a hernia so that's why it needs to be fixed. Plus, I'm pretty sure that a nut the size of a tangerine can't be comfortable for any male - no matter what age they happen to be.

I've known about the surgery for quite some time. In fact we had to reschedule it once already because he conveniently caught a cold and I guess colds and surgery and going under don't mix well.

But this time looks like it's a go. I have been really good about remaining calm, but I can feel myself starting to freak out a little more with each passing day. When I stop myself and think rationally about the whole thing, I know that things will be fine. But still - he's my baby, ya know?

I'm happy that this is getting taken care of that he won't be uncomfortable anymore, but damn, it's going to be a rough day.

I probably won't be posting a HASAY update on Monday because I will probably eat my weight in chocolate and fat and gain 20 lbs overnight. Holy cow - that would definitely elevate stress-eating to an all time high, wouldn't it?

When he's up and motoring around and things are back to "normal" I'll post again - maybe a couple at once. In the meantime, pray that my little guy sails through this and while you're at it - pray that I get lockjaw or something so that I won't devour every Krispy Creme at our local store!
Posted by Leslie at 4:08 PM

Sorry your little man has to have surgery, I hope you can avoid eating TOO much. I'm in a similar boat (I just posted about it today), my kid goes under the knife on Wednesday so I won't be paying attention to the blog as much as usual. I'm completely freaking out over here, I hope you're not freaking as much as I am. Good luck to you guys... and LOL @ in a nutshell. Pun intended, no?

When Mr. K. was sick donuts were my best friend.
It's really easy to think about all of the "what if's".
Deep breaths woman...all will be well with his nut sack. :) LOL

Oh I am so sorry you have to go through that. I wish you and your little boy the best. I hope he has a quick and easy surgery and smooth recovery! Big Hugs and all the best!

Ugh, sorry he's gotta have surgery. I think I pretty much speak for all of the HASAY peeps when I say that if you do gain a hefty 20 during this we won't bitch at you too much for it. Good luck, you and your little boy will be in my thoughts and prayers for sure.

My son also had this surgery (his condition was bilateral, so they did both testicles). He sailed through it with no problems - it's fairly routine and low-risk. It's also ALWAYS nerve-racking to have your child undergo any kind of operation.

thinking of your little guy and hope that everything went well.

good thoughts sent your way that you are all recovering and feeling fine.

Hope all went well and you all are better than norm. soon.