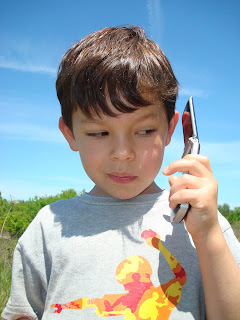 My husband took this picture of The Captain the other day while they were out "snake hunting".

That's what I thought - until I realized that The Captain is actually talking to me on that cell phone he's holding. I was probably telling him to be careful and to listen to his daddy and to wash his hands before he eats his snack and to make sure he put more sunscreen on.

Ok, NOW I think that's cute but when the picture first loaded, it looked like The Captain had a knife in his hand. I was all "oh man, they really let him hunt for snakes the old fashioned way" but then it dawned on me that it was a phone. Phew.

that is really cute! i think kids attitudes are so cute until they try to pull it off ten thousand times - then i'm all, "you put your sunscreen on right NOW mister- or no running out to the ice cream truck tonight!"

That is hilarious!!! Just last week Claire started banging her head against the wall when I told her she couldn't have something. Ahhhh...gotta love em!

He'll actually make a perfect teenager. That picture is great shot though, it will definitely lose its appeal once he's doing it to your face. Or with the accompanying door slams or "whatevers". You have so much to look forward to...

OH that is priceless!! Great ammo for those girlfriends when he is 16! But, keep a good outlook, who knows, he might turn into the sweetest 16 year old boy you have ever met!!
Just browsing through Oregon blogs when I came across yours.
~Bethany

Classic. At least you have evidence of his facial expressions when you're not looking.

I promise you that it will get much worse. Take it from someone that has an 18 year old BOY! I have watched change from the sweet innocent little baby to a darling little boy to a teenager from hell!

Oh! Snap! That's one look of "attitude!" :-) Good luck when he's a teenager. Though I'll probably have similar issues. I've got a couple like this too...but not as classic as this one!