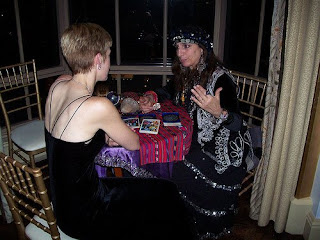 It's been over a week since my visit with the medium and I have been struggling with how to write this post - you know, exactly what to share and what not to. I just don't want to sound like a completely crazed maniac and make my tiny readership vanish like cupcakes at fat camp.

With that said, what follows is my best attempt at describing my hour and a half visit with her, which I must admit, I really enjoyed. And in case you're wondering - and I know you are - that is NOT her in the picture but that is exactly what I was afraid she would look like. In fact, I was so afraid of it that I almost chickened out at the last minute, but I mustered up the balls to go and I'm glad I did. For those of you who might just be stumbling upon my site for the first time - you can read my post The Fear of Death to catch you up to speed before you proceed any further - it will help you make sense of all of the gobbledygook in this post.

Anyway, the morning of my visit I pulled up to her "office". She greeted me at the door and I was instantly at ease with her. She was warm and friendly and very normal looking which I was very pleased with. Turns out she wasn't a quack at all and has in my opinion, quite a bit of "street cred", the main bit being that she works with four different police departments around the state of Colorado to help locate missing children and she's been doing this type of work almost her entire life. Good enough for me.

We sat down and exchanged pleasantries and she asked me if I had any particular issues I wanted to explore or any one in particular I wanted to contact. I was hoping to contact my grandfather, who passed away when I was about 5, but I just said that I was new to all of this and didn't really know where to start. She encouraged me to ask whatever questions came to mind so I decided to ask her what she thought was "out there" after we died. She couldn't say if there is a heaven and a hell, but she doesn't think it's all over when we die or she wouldn't be able to see and hear and what she does. Funny as that sounds - it made me feel better.

She spent most of our visit doing a general reading where she touched on quite a few things that really hit close to home. They're all too complicated to try to explain but suffice it to say that I was hanging on every word. If our visit had ended at this point I would have been happy with the whole experience, but then my grandfather dropped by for a visit.

I was just sitting there and she suddenly got really quiet. She said that she saw a "grandfather type" figure behind me. She said his hand was over his chest, like he had heart problems or suffered a heart attack (my grandfather died of a heart-attack). She said he was showing her his hands and that they were big and said that he looked like a big man (he was over 6'4) She said that she was seeing roads and bridges around him (he was a highway construction worker) and that he was saying that his back didn't hurt anymore (When he was alive, his back often hurt from sleeping on the ground or on cots at the work site when they were on long jobs. She said that he said that Mary was there with him (Mary was his sister. She and her husband owned the construction company that he worked for) She said that Mary said her legs felt better now (When my Aunt Mary was alive, she had bad arthritis in her legs) And then she asked me if there was a new baby on the way. I told her that the newest baby in my family was my youngest son who is now 15 mos. She shook her head and said that she saw a little girl there with my grandfather and that she would be in our lives by next Christmas. I told her that we were done having kids and she said that the little girl was very much meant to be in our lives and that it wasn't a matter of "if" it was a matter of "when". Needless to say, this last part took me by surprise.

I told my husband all of this, which he thinks is all a big fat load of hogwash. In his mind he's done having kids. He believes that once the kids outnumber the parents it can only spell disaster. Needless to say, there hasn't been any action at our house since I returned from my trip, but things will resume sometime in the near future once all of this fogs over in his mind. The trouble is, I don't think it will ever fog over in my mind. Am I cheating a little soul out of a chance at life if we continue to make sure we don't have any more kids? Do I want another baby? A couple of my friends say that I/we should just go about our lives as we would normally do and that if it's meant to happen then it will. I guess that's the only thing to do and doing anything other than that would be pretty stupid. And I know that I'm pretty lucky to have the biggest piece of shocker news be that we might have another baby - it could have been something worse.

As I was leaving I thanked her for her time and she siad "just call me when she's born" Talk about no pressure.
Posted by Leslie at 9:49 AM

Wow!!! That's cool. I have always wanted to do that, but have never tried. I just might have to. My kids are 14, 8 & 17myhs. We never thought about having anymore after Mahala. We were busy with life & enjoyed our little family. Then one day I had a real desire to have another boo boo. I was on heavy chemo & it didn't seem like the right time. Thanh said no. I talked with my dr & went over my options & talked with Thanh again. We decided for me to get off the chemo & give it a month. A month girlfriend!!! I prayed & prayed & told God if this is your will I can give it a month & then it's back on the chemo. Each week I was tested because it was important to know as soon as possible. On week 3 I tested possible. Can you believe that? He is a miracle for sure. He was wanting to come into our lives. So pray girlfriend!!!!

I think these psychics can put thoughts into your mind. I mean, if you would like to try for another child by all means do so, but in my cynical opinion I think these people say things like that to suck you in and maybe even come back for another visit.

Quick story: An ex-girlfriend of mine had a cat who died after eating anti-freeze. She was convinced someone gave it to the cat on purpose, so she went to a psychic to find out more. When I picked her up I asked her if the psychic knew what happened to the cat. My ex-girlfriend narrowed her eyes and said, "No. But she said you're hiding things from me!" Oy. Thanks a lot, psychic.